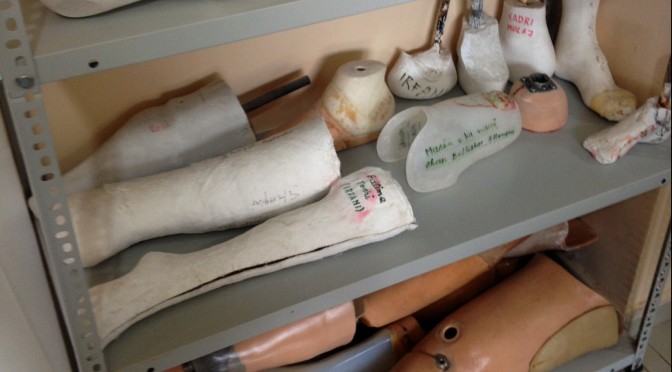 I’ve been aware of the story of my husband’s cousins for a few years now. It was one of numerous stories he shared with me about his previous life in Albania. Along with stories of horrific car crashes, munitions depots exploding, and cows being struck dead by lightning.

It wasn’t until I moved to Albania and met the cousins in question – two brothers in their 20s – that the full extent of the horrific accident and its life changing consequences really hit me.

Twelve years ago at the family farm, the brothers took their cows up on the hill to graze. In this paddock was unexploded ordnance (UXO). It had landed there after the munitions depot in the valley below exploded (due to poor maintenance by the Albanian army) firing munitions all over the area. The brothers lost limbs. One completely lost his sight. They both nearly lost their lives.

The subsequent years were spent in expensive medical treatment – none of which was funded by the Albanian government, who, in my opinion, are ultimately responsible for the UXO that devastated the brothers’ lives, and the lives of their family. The family had to pay for the urgent care needed immediately after the accident. International charities subsequently funded prosthetic limbs and operations attempting to restore their sight.

And then the brothers and their family were left to get on with life as best they could.

The Albanian government gave them NOTHING in support, or compensation. NOTHING. To this day, they get only the minimum benefits any person with a disability is entitled to in Albania. And trust me, it is minimal.

I met the brothers when I moved to Tirana and I was struck by three things: 1) how intelligent, interesting and lovely they both were; 2) how utterly inadequate their prostheses were; and 3) how much potential was being lost by not giving them both all the opportunities in the world to enable them to live full and complete lives.

If this accident had happened in the UK their story would be completely different. They would both be fully independent men capable of working and caring for themselves.

So I started to ask around to find out if anything could be done to help them.

I eventually tracked down the organisation to speak to. The Albanian Mine Action Executive, was set up to clear remaining landmines and UXO and provide support for the more than 800 survivors in Albania.

We met with a representative, only to be told that for no clear reason, the Albanian government stopped funding this organisation at the end of 2013. It seems there is no money being set aside for the ongoing care and rehabilitation of survivors. And apparently no funding is given to the only prosthesis centre in Albania set up to serve survivors who lost limbs.

We were told that international organisations are now reluctant to fund this work in Albania because the level of corruption is such that they cannot guarantee the money will be used as it should be.

In the meantime, one brother is stuck with a prosthetic leg that no longer fits him, causing him pain when he walks and slowly damaging his spine. The mechanics in the leg have failed so it cannot sense a change in his movements and so won’t bend when he wants to sit down. The other brother has two prosthetic arms that hang limply at his side. He cannot feed himself or do any of the basic tasks we all undertake on a daily basis to care for ourselves.

Prosthetic limbs, I’ve been told, require maintenance every two years – especially important when the survivor is young and still growing. For these young men it’s been 10 years.

We’ve now been told we can get a new leg. This process has started although it is some way from being successfully concluded. But because the technology is not available in Albania to provide prosthetic arms we have been told that it is not possible to get new arms – even though the technology is available in many other countries in Europe. This is not an acceptable reason to leave a young man entirely dependent on others for his basic needs.

By not providing adequate, ongoing care and rehabilitation to survivors of landmines and UXOs the Albanian government risks failing to meet its obligations as a signatory of the 2008 Convention on Cluster Munitions.

And that is why I am talking about arms and legs.

“Each State Party with respect to cluster munition victims in areas under its jurisdiction or control shall, in accordance with applicable international humanitarian and human rights law, adequately provide age- and gender-sensitive assistance, including medical care, rehabilitation and psychological support, as well as provide for their social and economic inclusion.”

You can find out more here:

You can raise this issue with the Albanian government by tweeting and asking these people to reinstate funding for the organisations supporting survivors of landmines:

… and you can raise awareness by sharing this blog post. Thank you.

It’s been a very frustrating few weeks. Like tear-your-hair-out frustrating. There’s been a lot going on between looking after family members, wedding planning, visa organising and house hunting. And it’s seemed we’ve been thwarted at every decision point. Lurking in the background has been this niggling issue of sorting out the farmhouse before my folks arrive for the wedding in June.

It all got too much at Easter. We had planned long ago that we would be on a road trip back from Germany and would stop at the farm on the way home to enjoy Easter with hubby’s family. And when we were forced to postpone our European road trip we decided instead to put some concentrated effort into the farm house. Then slowly that time was eaten into.

So when we found ourselves still in Tirana, after four days of miserable rain and achieving nothing whatsoever, we had a hissy fit, packed up the car and drove to the farm.

We got our Albanian Easter! It wasn’t exactly as we had planned it. But it was better than being stuck in Tirana in the rain!

While most of Albania is Muslim, hubby’s family is Catholic, so Easter is a key date on the calendar. It’s celebrated by the family coming together and an enormous number of eggs. Those poor chickens must have been working overtime in the days running up to the holiday!! The eggs are boiled and dyed different colours, or hand-painted. Each person gets an egg and has to tap the pointy end with someone else’s egg to try to crack it. The person whose egg survives uncracked ‘wins’ the other egg. My hubby scored the world’s strongest egg – it seemed like he was unbeatable but a few foolish bumps against the table weakened the super egg and he was eventually beaten!

Work on the farm house is not going as anticipated. Some serious investment is needed to return key services to the farmhouse so we’ve decided to concentrate on restoring the two bedrooms rather than the living room and kitchen. Who needs electricity, water, and plumbing anyway?!

The coolest thing though is that we do have one room sorted enough to be able to sleep there. To wake in the morning in the house where hubby spent his childhood, hear the chickens clucking around outside and look out the window towards the mountains – amazing.

Our work isn’t going to restore the farm to something worthy of some house and home magazine – but we hope it will encourage the family to come and stay at the farm more often, and give the kiddies some amazing memories like the ones my hubby treasures.

It’s been two months now since I arrived in Albania and in that time I’ve had so many new customs and rituals to get my head around, especially as we plan our Albanian wedding in June – an event overloaded with ritual!

So it’s been a privilege over the past week to have witnessed and participated in some of the rituals around birth and death in Albania. More than once I found myself way out of my depth and just hoping I wasn’t deeply offending anybody by doing or saying the wrong thing!

A few days ago we paid our respects at the family home of a distant relative of hubby’s only a few hours after we learned of his death in Italy. There were a lot of people already there. On our arrival they all lined up outside the house to greet us and we walked down the line shaking hands with each of them. (It reminded me of a lot of being welcomed onto a marae in New Zealand.) No words were spoken – mercifully, as I had no idea what I was supposed to say. We all went into the house and sat in the living room where we were served coffee (Turkish style) and/or raki.

Understandably absent was the friendly chatter and smiles that you will always find in the Albanian home. It was a brief visit. But all the family again lined up outside the house as we prepared to leave and we again shook hands all the way down the line.

Funerals happen very quickly in Albania, (commonly within 24-48 hours of death) both in the Muslim and Catholic tradition. The family congregates at the family home with the body of the deceased and will spend the night in the house. The women of the family will wear black – sometimes for very long periods of time – years even – if they lose their husband or a child.

Notice of a death is often posted on A4 printed notices pasted on walls in a prominent area of town. This harks back to the old days when it was difficult to get the news to people – particularly in the less forgiving terrain of northern Albania.

As the family of the baby’s mother, we drove in convoy to the house and arrived together. Again the family had lined up outside the house to greet us. But before I knew it, hubby had been whisked away as the men enter first, followed by the women, for more greetings and handshaking. We entered the house and men and women sat in separate rooms. We got to drink coffee, coo over the new baby and leave gifts while the men drank raki and left money for the family.

Then it was time for the party! We headed off to the restaurant. The rest of the afternoon was a blur of food, food, more food, drinking, toasts, and cuddling the world’s most tolerant baby who slept through 40 people all taking turns for cuddles and loud pumping music. Because of course, there was dancing! (Albanian housewife achievement of the day was being complimented on my Albanian dancing by my mother-in-law! Result!)

It’s all got us planning and talking about what will happen over the two-day wedding bonanza in June! In effect it represents me leaving my family and joining my hubby’s family. (My dad is quite excited that he will no longer have any responsibility for me!) I’m finding the whole thing very male-dominated. In fact, being a woman in Albania is so different to being a woman in NZ and the UK so I think I’ll save this topic up for a future blog post!